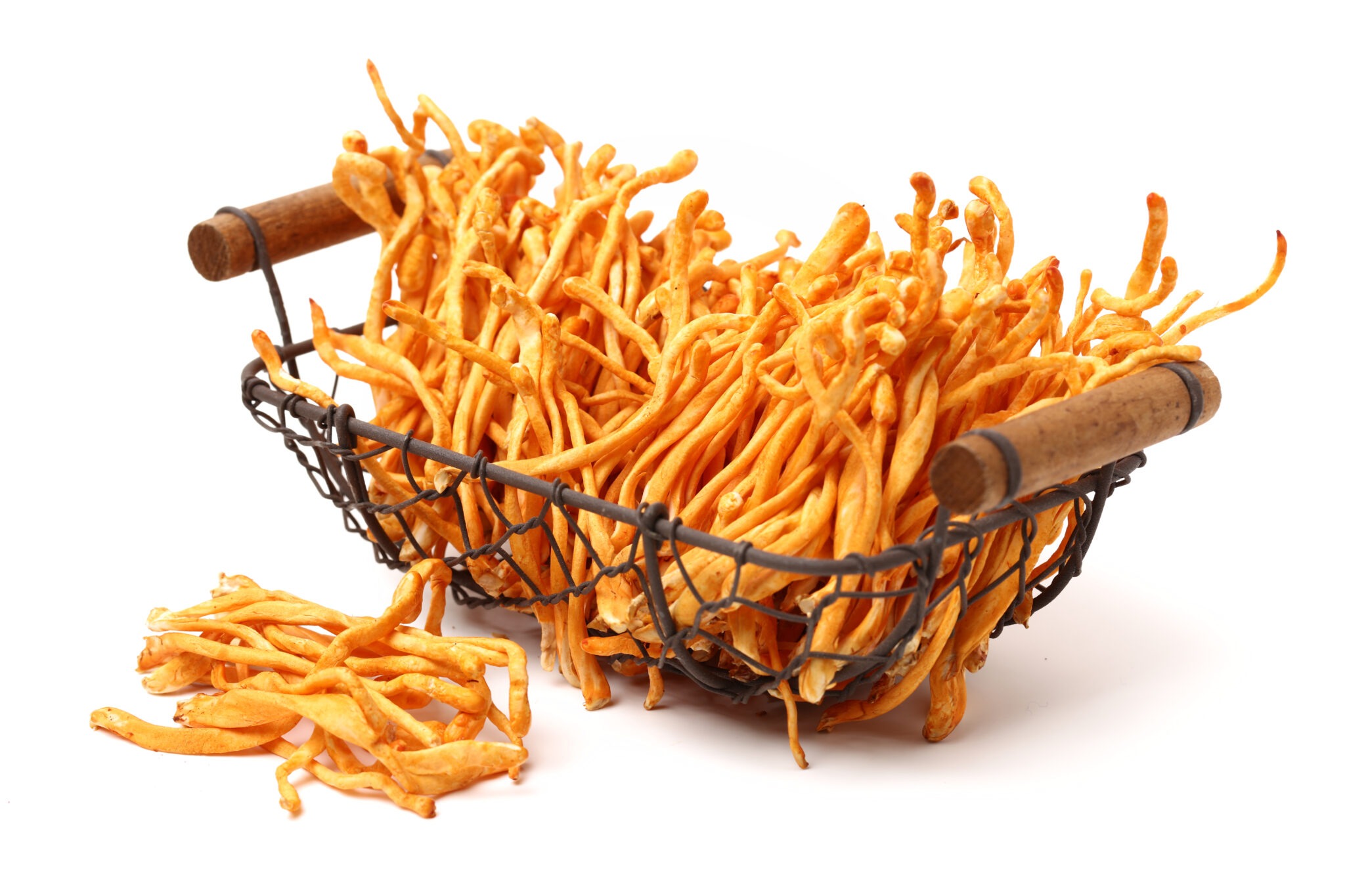 Cordyceps mushroom is a highly-priced fungus or medicinal mushroom throughout the world, hence known as “fungal gold” or “soft gold”. The color of the fruit body is dark brown to black the larval body pervaded by the mycelium, is yellowish to brown color with sweet in taste, and neutral in nature (2). Cordyceps benefits protect the liver, kidney, manage diabetes, asthma, cholesterol, and gut health. Treats male & female sexual dysfunctions.

Origin- Cordyceps mushroom is a fungal parasite that grows on a rare caterpillar (Hepialis armoricanus) until the caterpillar dies and the mushroom sprouts from the caterpillar’s head and ends at the club-like cap, including the stipe and stroma. It has been used as a tonic herb in Chinese traditional medicine. Cultivated in – Subtropical and tropical regions, especially east and south-east Asia, North America, and Europe except Antarctica an altitude of 3500–5000 meters above sea level (1).

History– Cordyceps was first introduced to Western society during the 17th century. Cordyceps militaris and Cordyceps sinensis belong to the same genus, but the different species and have been valued in Traditional Chinese Medicine for more than 2000 years.

Cordyceps mushroom benefits are due to high nutritious rich in essential amino acids (lysine, glutamic acid, proline, and threonine), vitamins like B1, B2, B12, and K, different kinds of carbohydrates such as monosaccharide, oligosaccharides, and various medicinally important polysaccharides, proteins, sterols, nucleosides, and other trace elements (3). The fruiting body is also rich in unsaturated fatty acids (e.g., linoleic acid), which comprise about 70 % of the total fatty acids. The most abundant unsaturated acid was linoleic acid. A number of bioactive constituents present in this mushroom such as polysaccharides, cordycepin, mannitol, aminophenol, and ergosterol with various pharmacological actions, such as nephroprotective, hepatoprotective, inflammatory effects, antioxidant and antiapoptotic properties (4).

Polysaccharides obtained from Cordyceps sinensis enhance the phagocytic capacity of peritoneal macrophages, proliferation ability of spleen lymphocytes and defense against microbial invasion, leukocyte activation enhance the innate immune system (6). Hence cordyceps mushroom benefits due to cordycepin found in this mushroom affected the actions of immune cells and the cytokine network (7).

Cordyceps mushroom benefits are mainly because of the active components that act as an anti-inflammatory. These suppress tissue injury associated with the pathological processes of many inflammatory diseases including bronchitis, inflammatory bowel disease, multiple sclerosis gastritis, and rheumatoid arthritis (8).

Cordyceps militaris contain extracellular biopolymers (30 mg/kg/day for 4 weeks) may be helpful as an effective drug for liver fibrosis which may prevent or cure liver fibrosis induced by bile duct ligation and scission (BDL/S) operation (9).

Furthermore, this mushroom consumption possesses anti-metastatic activity with no weight loss or toxicity against liver metastasis of Lewis lung carcinoma (LLC) and B16 melanoma (B16) cells (13).

Cordyceps militaris contain cordycepin which exerts their protective action against oxidative stress through directly scavenging reactive oxygen species and NO, which may regulate the expression of Bcl-2 family protein, caspase activity, and mitochondrial function (14).

Supplementation of Cordyceps militaris improves sperm quality and quantity via increase percentages of motile sperm cells and sperm morphology. Moreover, Cordyceps sinensis possess sex steroid-like effects by increasing production of testosterone, enhance reproductive activity and restore the impaired reproductive function, thus may be useful as a therapeutic agent in treating hypolibidenism and other sexual malfunction in both men and women (16, 17).

Cordyceps militaris is a good source of protein which shows strong antifungal effect against the growth of the fungus Fusarium oxysporum and exhibited fungicide or for meat tenderizer because of its protease activity, as has been suggested previously (19). Furthermore, cordycepin exhibited potent antifungal efficacy against Candida albicans and Candida krusei thus cordycepin is a new class of antifungal compounds and offers new options for the treatment of fungal infections (20).

The presence of various antioxidants like cordycepin, cordycepic acid, sterols (ergosterol), nucleosides, and polysaccharides in Cordyceps are useful to treat different types of viruses including human immunodeficiency virus (HIV), herpes virus (HSV), hepatitis C virus (HCV), and influenza virus by modulation of the immune function of macrophages. This mushroom also possesses a balancing effect on host immune regulation because it shows an immune-enhancing effect in uninfected, healthy animals and an immune-inhibitory effect in virus-infected with stable body weight and reduced mortality (21, 22).

Fatigue is a common symptom in sickness and in health and classified into mental and physical fatigue. However, supplementation of  Cordyceps militaris (4g/day) for one week improves tolerance to high-intensity exercise, improvements in oxygen consumption, ventilatory threshold, time to exhaustion, and delaying fatigue (24). In another study suggested that oral administration of Cordyceps sinensis (500 mg/kg/day for 4 weeks) shows antidepressant-like activity which prolonged the swimming time and enhances immunity with reduction of fatigue (25).

C. sinensis consumption reduces asthma-induced inflammation; improves the quality of life of the patients by reducing asthma-related symptoms and asthma onset frequency and severity. Therefore this mushroom may be helpful as effective Chinese medicine for asthma patients without additional safety risks (26).

Bioactive components such as adenosine, cordycepin, and polysaccharides found in C. militaris significantly reverse the scopolamine-induced deficit in memory and improve neurite outgrowth. Thus, Cordyceps militaris may act as a therapeutic agent that may develop safe and healthy dietary supplements for brain and cognitive health (27).

17. Lower cholesterol levels due to cordycepin in mushrooms

18. Healthy heart due to adenosine in Cordyceps mushrooms

Cordyceps sinensis contains polypeptide which may reduce the mean arterial pressure and induce a direct endothelium-dependent vasorelaxant effect by stimulating the production of nitric oxide and treating hypertension (31).

Cordyceps sinensis contain polysaccharides that reduce the formation of reactive oxygen species and the damage through transforming the growth factor pathway. Thus polysaccharide of this mushroom had a significant protective effect of chronic renal failure (40 mg/kg and 80 mg/kg) (32).

Polysaccharide present in Cordyceps sinensis modulates the cellular immune function and increases the serum complement level in patients with post-hepatitic cirrhosis. It also improves the immunological functions of organic cells, removing harmful components and thus reducing the injury to liver cells by promoting the degradation of the collagens. Therefore, this mushroom possesses a protective effect on immune liver injury, the effect on patients with chronic hepatitis B, the effect on patients with hepatic cirrhosis after hepatitis, protective effect on liver fibrosis (33).

Side effect of Cordyceps mushroom

A novel protein found in Cordyceps mushrooms is known as CMP which is the harmful protein that causes cell death through mitochondrial-dependent apoptosis, However, heat treatment and alkalization degraded CMP. Therefore, cooking is necessary before consumption to eliminate CMP (34).

Furthermore, various health benefits of Cordyceps mushrooms were reported but some of this research was done on animals, human clinical trials have not been done yet thus precaution should be needed before consumption.