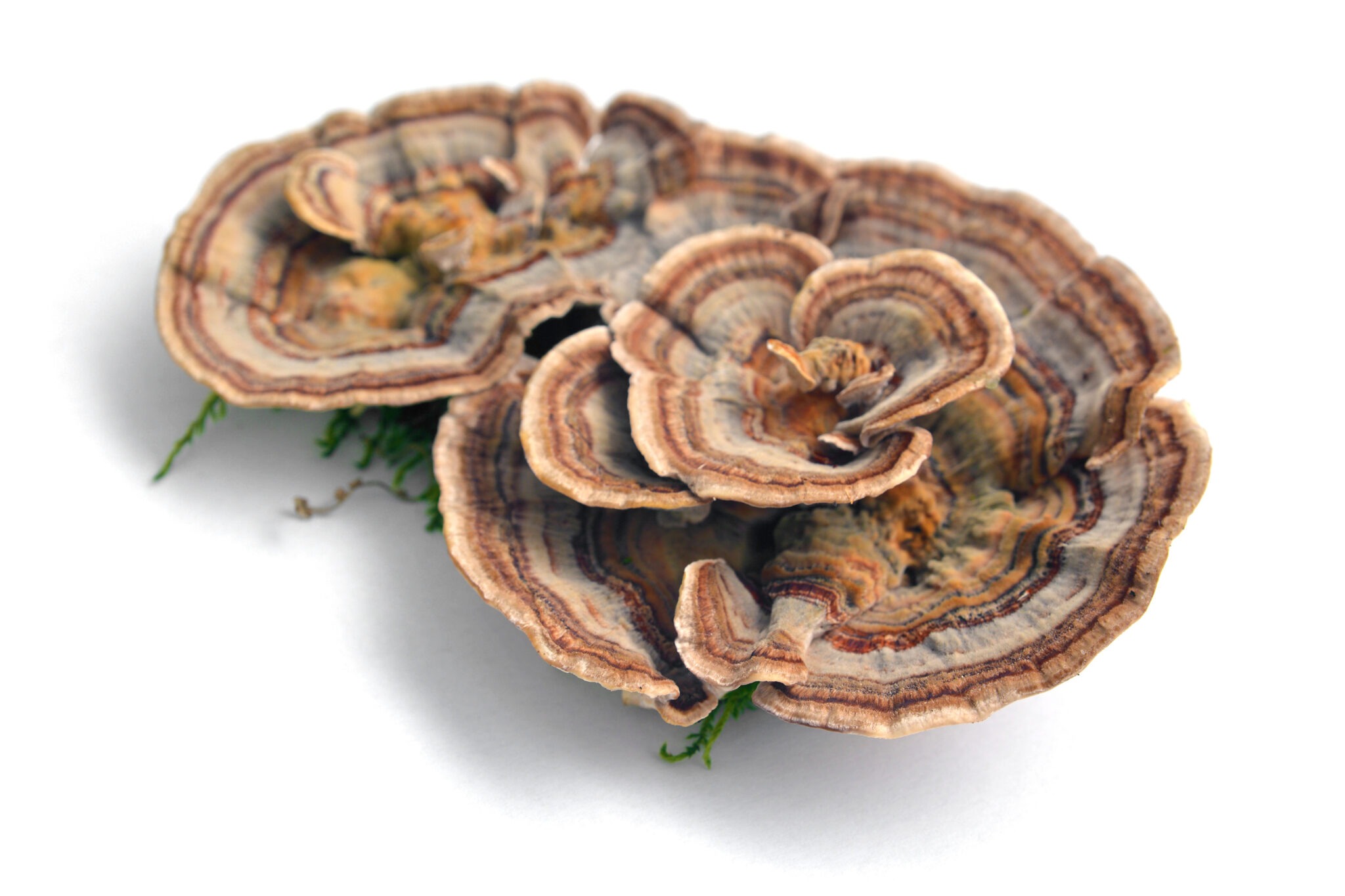 Turkey tail mushrooms are a very popular, white-rot lignicolous fungus. Commonly used for its medicinal and nutritive properties. It has a long history of medical use in Asia, dating back over 2000 years in traditional Asian medicine (1). Turkey tail benefits and other details are as follows.

Locally, turkey tail mushroom is called ‘Ungi’ and is often used as a home remedy or a dietary supplement (2). It’s named turkey tail because its rings of brown and tan look like the tail feathers of a turkey.

Taste and Texture: Turkey tail mushroom is sweet in nature, mild in taste, widely grown as saprophytes on many deciduous trees (oak, Prunus) and some conifers (fir and pine trees), with basidium mostly appearing on stubs and trunks throughout the year (3).

Turkey tail benefits are due to it has starch, fiber, chitin, and a high amount of protein. Antioxidative compounds like polysaccharides, phenolic compounds gallic acid, protocatechuic acid, and catechin. This mushroom is also rich in calcium and minerals, vitamins B1, B2, C, and D, ergosterol, selenium, and eritadenine.

Turkey tail mushroom possesses the ability to accumulate and transform selenium into a non-toxic form (L-selenomethionine). This can be used as a food supplement.

It also increases L-glutamic and L-aspartic acids in mycelium which is very beneficial as a flavor enhancer also improves antioxidative and antibacterial activities thus prolong the shelf life of food products with added health benefits (4).

Rich source of polysaccharopeptide (β-Glucan) possesses immunomodulatory function. Polysaccharopeptide activates and enhances the function and recognition ability of immune cells, strengthens the phagocytosis of macrophages, and ameliorates the adverse events associated with chemotherapy (5).

Furthermore, 9 grams/day of Turkey tail mushroom is safe and tolerable in women with breast cancer. Thus can be used as an immunotherapeutic agent for cancer treatment and improving the survival and quality of life in patients suffering cancers, hepatopathy, hyperlipidemia, chronic bronchitis, and other complex diseases (6).

The polysaccharide of this mushroom cuts the source of glucose from the intestine and increases glucose uptake by peripheral organs, such as the liver, adipose tissue, and skeletal muscle. Thus, reduced blood glucose levels increased glucose consumption in insulin-resistant cells and can be useful for diabetic patients who also suffer from cancer or microbial infections (9).

Aflatoxin is the most harmful mycotoxin that produces by contaminated staple cereals such as maize. Therefore, cultivation Turkey tail mushrooms act as a ‘‘healing mushrooms’’ because it contains β-glucan which inhibits aflatoxin and stimulates the host immune response (13).

Consumption of this mushroom helps in inhibiting HIV-1 reverse transcriptase and glycohydrolase enzyme associated with viral glycosylation. Which later expands the HIV virus (14). Furthermore Turkey tail mushroom may help heal infections, such as an oral strain of the human papillomavirus(HPV) (15).

Therefore, Turkey tail mushrooms can be useful as an alternative source of bioactive substances to be used in the treatment of Alzheimer’s disease and other neurodegenerative diseases (16).

Turkey tail mushroom is a rich source of polysaccharide peptide that not only acts as a prebiotic agent to increase good bacteria like Bifidobacterium and Lactobacillus bacteria but also reduce bad bacteria like Clostridium, Staphylococcus, and Enterococcus. Thus, alter the composition of the microbial community which disrupts by various factors (17).

Turkey tail mushroom contains a protein known as TVC. Which increases the proliferation of human peripheral blood lymphocytes enhances the production of both nitric oxide and tumor necrosis factor-alpha.

Therefore, the turkey tail mushroom acts as an immunostimulant that can boost immune response. It may be useful for the development of new drug types for the treatment of cancer and various autoimmune diseases (18).

Turkey tail mushrooms are a good source of terpenoids, polysaccharides (polysaccharopeptides and polysaccharide krestin), and cinnamic acid. Which are beneficial for protection against various bacteria and fungi such as Saccharomyces cerevisiae, Candida albicans, Aspergillus flavus, Aspergillus fumigatus, and Aspergillus niger (19).

Turkey tail mushroom benefits are due to antioxidants such as Ergosterol, Polysaccharide-K (Krestin; PSK), and polysaccharide peptide (PSP). Which can be used as an anticancer drug for cancer treatment along with surgery, chemotherapy, and radiation therapy (21).

Side effect of Turkey tail mushroom