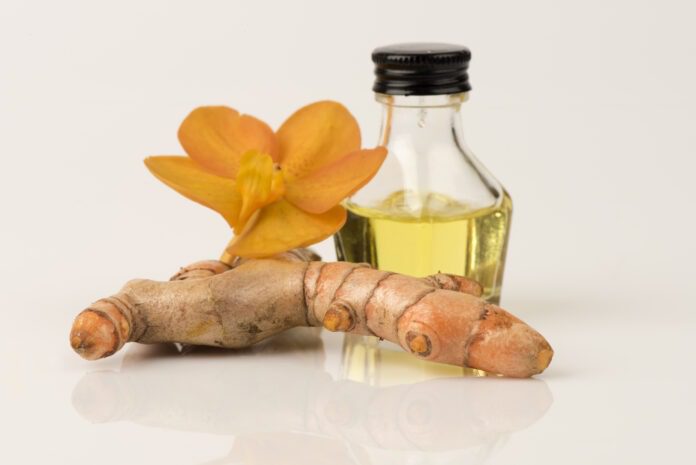 Turmeric essential oil is obtained from the rhizome of the turmeric plant (Curcuma longa Linn.) belonging to the family Zingiberaceae. It is mainly obtained by steam distillation, supercritical fluid extraction, solvent extraction, and hydrodistillation. The color of the oil is yellow to light brown viscous liquid. It is extensively used as a flavor ingredient in major food products including alcoholic and nonalcoholic beverages because of beneficial compounds like sesquiterpene, ketones, β-, and ar-turmerone. Turmeric oil health benefits are anti-inflammatory, analgesic & antifungal. Treats respiratory, skin problems, arthritis & malaria.

Turmeric has been used traditionally as a medicinal herb in India and South East Asia for 4000 years. It is mainly used for biliary disorders, anorexia, coryza, cough, hepatic and rheumatic ailments and a variety of other chronic inflammatory diseases. It probably reached China by 700 AD, East Africa by 800 AD, West Africa by 1200 AD, and Jamaica in the eighteenth century.

This oil is native in the south and southeast tropical Asia, has great importance in medicine, condiment, and cosmetic industries.

3. Anticancer properties due to Curcumin and ar-turmerone

Turmeric oil acts as a powerful agent for the prevention of inflammation-associated colon carcinogenesis (6). It also inhibits the growth of cancer cells, mutagenicity induced by different mutagens, and protect the body (7).

5. Slows hair-growth and lightens skin in the armpit

Turmeric essential oil is a rich source of ar-turmerone (61.79%), curlone (12.48%), and ar-curcumene (6.11%) which is found to have antioxidant activity, scavenging free radicals and inhibit lipid peroxidation (11).

Turmeric oil containing nanocapsules is very effective against Plasmodium berghei because it contains curcumin, which possesses low toxicity and a wide range of pharmacological activities, including anti-inflammatory, anticancer, antioxidant, and antiparasitic properties (12).

A research study suggested that accumulation of amyloid-β peptide is associated with Alzheimer’s dementia, however, a mixture of sesame extract and turmeric oil is very helpful to improve the bioavailability of sesamin and sesamolin which further inhibit β-secretase activity and protect from Alzheimer disease (13).

Oral administration of turmeric essential oil contains the ability to reduce ethanol-induced lesions such as necrosis, erosion, and hemorrhage of the stomach. Therefore, turmeric oil reduces the gastric ulcer, antioxidant enzymes such as GPx, SOD, catalase, and GSH and protects from gastric ulcer (14).

Inhalation of turmeric oil is very effective in removing sputum, relieving cough, and preventing asthma. Therefore, turmeric volatile oil may be an efficacious drug for the treatment of respiratory diseases (17).

Turmeric essential oil is nontoxic inhibit joint swelling (90-100% inhibition) thus this oil may be useful in the treatment of rheumatoid arthritis (RA), significant morbidity, and mortality (18).

Side effects of turmeric oil

According to the guidelines of the Organisation for Economic Co-operation and Development confirmed that turmeric oil non-toxic and safe (20). But if you feel symptoms like allergic skin rashes, intercurrent fever should stop using turmeric oil (21).

Turmeric in massage oil may cause allergic contact dermatitis (hands, forearms, and dorsa of the feet) when applied to the skin (22). Furthermore, a person who is applied turmeric essential oil for osteoarthritis pain suffer itchy rash on the bilateral knees that subsequently spread to the neck, trunk, and arms and result from erythema multiforme- like allergic contact dermatitis. Thus, before application precaution should be needed (23).