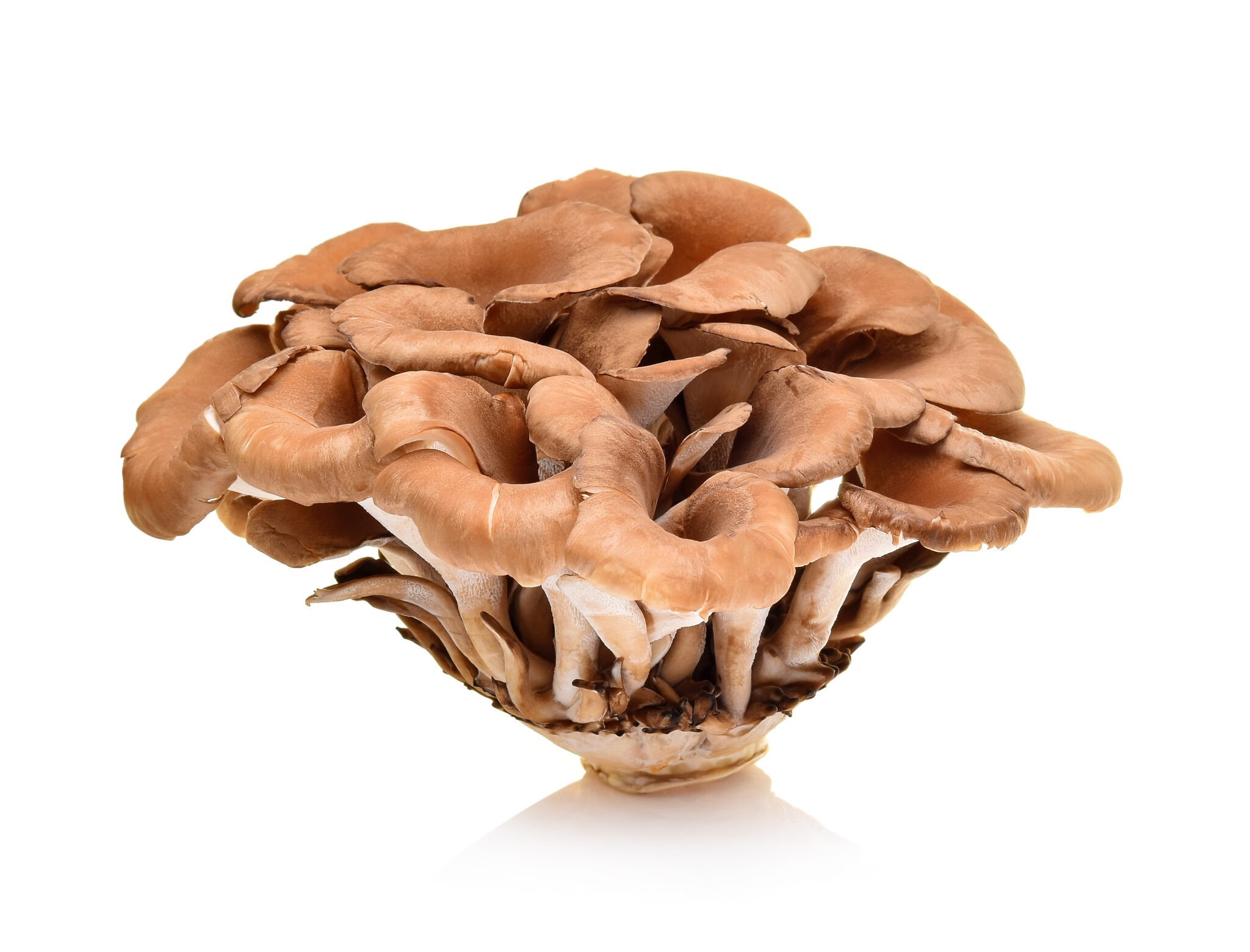 Maitake mushrooms are the most valuable, expensive, and medicinal mushrooms. Mainly consumed by Chinese and Japanese people for hundreds of years because of their excellent taste, texture, and nutrition. Maitake is a heavy mass (20 inches in diameter and weighs up to 100 pounds) at the base of stumps and on the roots of oaks, elms, beech, chestnut, maple persimmons, and other trees (1).

Grifola frondosa name derived from the beast from Greek mythology known as the griffin. Frondosa, meaning leaf-like. Whereas Maitake in Japan is derived from two words  “mai” which means dance and “take” which means mushroom. Therefore it is also known in the name of “dancing mushroom.”

The name dancing mushrooms of Maitake is also because of its appearance and its vulnerability in the wild. The large fruiting body characterized by overlapping caps like butterflies in a wild dance, or because mushroom seekers who were lucky enough to come upon maitake in the wild would dance for joy (2).

Maitake mushroom benefits are due to immense biological activities such as anti-cancer, antiviral, antioxidant, immunomodulatory, anti-inflammatory, anti-cholesterol properties. It also helps in lowering blood pressure and protect the liver (5).

Polysaccharides in mushrooms such as glucans and D-fraction stimulate strong cellular and humoral immunity. Therefore Maitake mushroom helps in protecting the body against foreign pathogens (6 & 7).

Maitake mushrooms act as an antihyperlipidemic agent which lowers serum cholesterol levels. The cholesterol gets converted into bile acid and increases the fecal cholesterol excretion (8).

Dried maitake powder inhibits lipid accumulation in the body and improves lipid metabolism which further increased by the ingestion of a high-fat diet (9).

5. Presence of antioxidants in Maitake mushrooms

Ergosterol (50 mg/100 g)  found in Maitake mushrooms possesses anti-allergic effects. This compound helps in the inhibition of allergic inflammation caused by mast cells (antigen-induced) with immediate symptoms of IgE-mediated allergic diseases, including allergic rhinitis (hay fever), asthma, food allergy, and anaphylaxis. Therefore, this mushroom ergosterol and its derivatives as active compounds may be beneficial in the prevention or treatment of mast cell-dependent allergic diseases (16).

Maitake mushroom polyphenols have the ability to prevent intestinal inflammation caused by inflammatory bowel disease (IBD). Thus this mushroom may be used as an alternative medicine for IBD (18).

Polysaccharides present in Maitake mushrooms are responsible for protection against different bacteria such as Staphylococcus aureus, Escherichia coli, Listeria monocytogenes, and Bacillus megaterium (19).

11. Radioprotective properties due to exopolysaccharides

Maitake mushrooms are a good source of exopolysaccharide which is made up of proteoglycan (85.6% carbohydrates and 7.3% proteins) that restore hemoglobin, white blood cell counts, and red blood cell counts and showed 50% survival post-irradiation. Thus polysaccharide from maitake fungus possesses the desirable properties of an ideal radioprotector from ultraviolet-A (UVA) light (20).

A continuing inflammatory response can cause the development of nonalcoholic steatohepatitis (NASH), in which lipid abnormal metabolism occurs in the liver. However, intake of Maitake mushroom reduces lipid accumulation and reactive oxygen species production thus reduces inflammatory responses and ameliorating NASH, and show hepatoprotective effects (21).

Polycystic ovary syndrome (PCOS) is the most common endocrine disorder in reproductive women, in which different problems include menstrual dysfunction, hyperandrogenism, and metabolic complications is occur. However, the presence of water-soluble glycoprotein is useful as a monotherapy for the induction of ovulation in women with PCOS disease (23).

15. Detoxify mercury from the body because of polysaccharide-peptide in Maitake

As we know that mercury is a global pollutant that is dangerous because when mercury enters the body, it will be distributed all over the body and accumulate in the brain, kidney, and liver.  Research study supported that Maitake mushroom (7.44 g dried or 74.4 g fresh) contains polysaccharide-peptide that possesses mercury adsorption capacity which accelerates the decline of blood mercury level and promoted the elimination of the burden of mercury in the liver and kidneys (24).

Aging mainly caused by neurological impairment, decreased activity of antioxidant enzymes, and poor immune responses as a sign of senescent manifestation, such as low body weight, hair pull-off, slow behavior, and lassitude. MT-α-glucan found in maitake mushroom act as an anti-aging agent which delays senescence and improves antioxidation or immunomodulation (25).

β-glucan obtained from Maitake mushrooms enhanced the activities of immunocompetent cells such as macrophages, cytotoxic T cells, or helper T cells which kill or suppress the multiplication of HIV. Thus maitake mushrooms may be beneficial in the treatment of HIV infection (26).

Now a day’s stress is a common problem that reduces the ability of the immune system to fight infections. Therefore glucan-rich Maitake mushroom with Ashwagandha may stimulation phagocytic activity and block corticosterone production due to stress further strengthen the immune system and reduce stress (27).

Maitake mushrooms are a good source of natural bioactive compounds that stimulate neurite outgrowth. Therefore, regular consumption of mushrooms promotes nerve and brain health by improvement in the cognitive abilities of the aged (28).

Studies suggested that 5 mg/kg per day of Maitake mushroom beta‐glucan is able to block more than 60% of breast cancer development, increases the overall survival from 10 to 75%, block tumor invasiveness, reduce angiogenesis, and increase overall survival (30).

Therefore Maitake mushroom may act as a cytotoxic agent not only to alleviate various side effects and improve the quality of life of patients under chemotherapy but also have a possible chemosensitizing effect to improve the efficacy of chemotherapy.

Side effects of Maitake mushroom

Hypersensitivity pneumonitis caused by maitake mushroom spores inhalation with respiratory symptoms occurs after 3 months of work on a mushroom farm. However treatment also available but precautions like wearing masks should be needed (31).