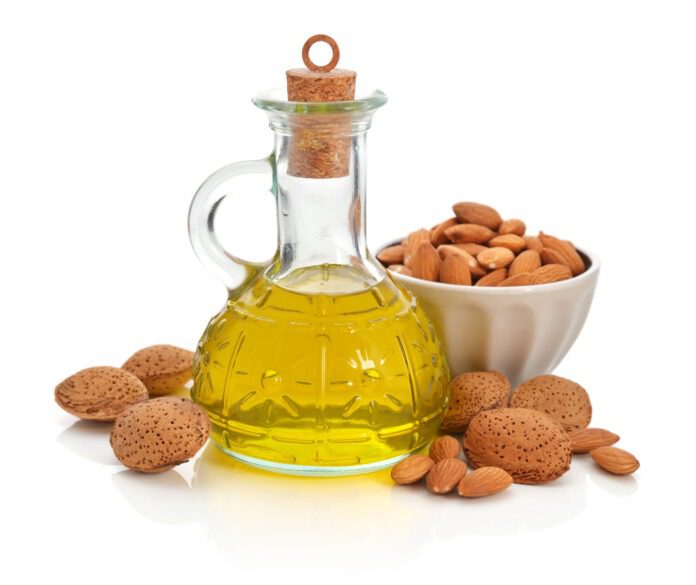 Almond oil has long been used in complementary medicine circles for its numerous health benefits. It is obtained from the almonds (family: Rosaceae) by distillation process (solvent extraction) or pressing the almonds without their peels. Almond oil benefits are due to a powerful natural bioactive compound which exhibits various pharmacological properties such as antioxidant, anti-inflammatory, cardioprotective, hepatoprotective, antigenotoxic, and anticarcinogenic effects (4).

Almond species is related to the peach, plum, and cherry and distributed throughout the world. It is produced mainly in the Mediterranean region and the United States, which are the major producer and exporter of almond, followed by Spain, Australia, Iran, Morocco, Italy, and the Syrian Arab Republic (1).

Almond oil group is composed of two major varieties bitter almond (Prunus amygdalus “amara”) used medicinally in folk medicine in Asia and Europe and the sweet almond (Prunus amygdalus “dulcis”) edible nuts, commonly consumed and used mainly for culinary purposes, and making of oils and flavorings, respectively. The bitter taste of the bitter almonds is attributed to amygdalin however; oil is extracted mainly from sweet almonds, which contain around 50% oil (2).

Almond oil benefits are due to a powerful natural bioactive compound which exhibits various pharmacological properties such as antioxidant, anti-inflammatory, cardioprotective, hepatoprotective, antigenotoxic, and anticarcinogenic effects (4).

3. Almond oil is a key component of moisturizers

Folic acid, alpha-tocopherol, and zinc in almond oil are useful in skin disorders. Furthermore, this oil is very useful as herbal moisturizers for restoring skin hydration and viscoelasticity properties (7).

Almond oil contains bioactive compounds such as n beta-zoosterol, squalene, and alpha-tocopherol which improve complexion and skin tone. Thus almond oil may be useful as a therapeutic agent to maintain the elasticity of the skin and its youthful appearance (8).

Ultraviolet (UV) radiation has been implicated in photoaging (wrinkled, spotted skin include chronologic aging) and various types of skin carcinomas.

However, treatments with almond oil help to reduce some of the histologic damage associated with photoaging of skin thus the photoprotective effect of almond oil on the skin after UV exposure which further reduces the risk of UVB-induced skin tumors.  Furthermore, almond oil contains manganese, an essential trace metal used as a skin supplement for suppressing premature aging, irritation, and blemishes. Manganese also triggers energy production and activates certain skin enzymes (9).

Almond oil helps in softening the ear wax or relieve ventilation tube blockage without any adverse effect. Thus this oil can be used alone or part of commercial preparations (Otocerol/ Earex) to lubricate and soften cerumen before irrigation and improve hearing in humans (10).

Rectal prolapse is one type of health problem which creates an inability to control bowel movements in which rectum protrudes from the anus by many reasons like pregnancy, straining during constipation.

Almond oil phenol injection is simple and very beneficial for the treatment for rectal prolapsed. As it did not damage the intramural network of the nerve plexus of the rectum, found normal anorectal reflex and relive from constipation (11).

Pequi almond oil contains a various therapeutic compound which attenuates acute hepatic damage hepatic inflammation due to its antioxidant and anti-inflammatory properties. Moreover, this oil also improves the antioxidant defense system, by increasing the activities of hepatic antioxidant enzymes at the protein level (12).

Striae gravidarum is pink-purple lines, is a change in connective tissue during the sixth and seventh months of the pregnancy, mostly found in 90% of pregnant women, but they never disappear completely. It was found that a 15-minute massage with almond oil on the surface of the abdomen from the 19th gestational week reduce the development of striae gravidarum (13). Moreover, Aloe vera and sweet almond oil cream also effective to decrease itching and erythema and reduce the striae and prevent their progression (14).

Almond oil is useful as a moisturizer as it contains high levels of fatty acids and hence used for centuries to treat skin diseases such as eczema and psoriasis (15).

It contains linoleic acid (omega-6 (ω-6) fatty acids) which is beneficial in wound it decreases healing time and promote collagen synthesis and also protects them from infections (16,17).

Almond oil shows the wonderful effect as moisturizers and revitalizers because it contains glycerides of oleic and linoleic acid, phytosterols, α-tocopherol, and vitamin K. It helps in normalizing the cell lipid layer and improving the water retention capability. α-Tocopherol improves water-binding ability, improving the appearance of rough and damaged skin. In addition to these, it does not clog pores or leave the skin oily (18).

A research study suggested that inhalation of almond oil alone or in combination with lavender oil reduced the immobility characteristics associated with depression because it contains omega-3 fatty acids have anti-depressant like effects. Therefore, treatment with almond oil, alleviating depression (19).

Side effect of Almond oil

Almond oil has almond allergens. A study suggested that child having atopic dermatitis should not use almond oil. As it results in the development of contact dermatitis like focal lesions of persistent eczema due to percutaneous sensitization to food proteins (20).