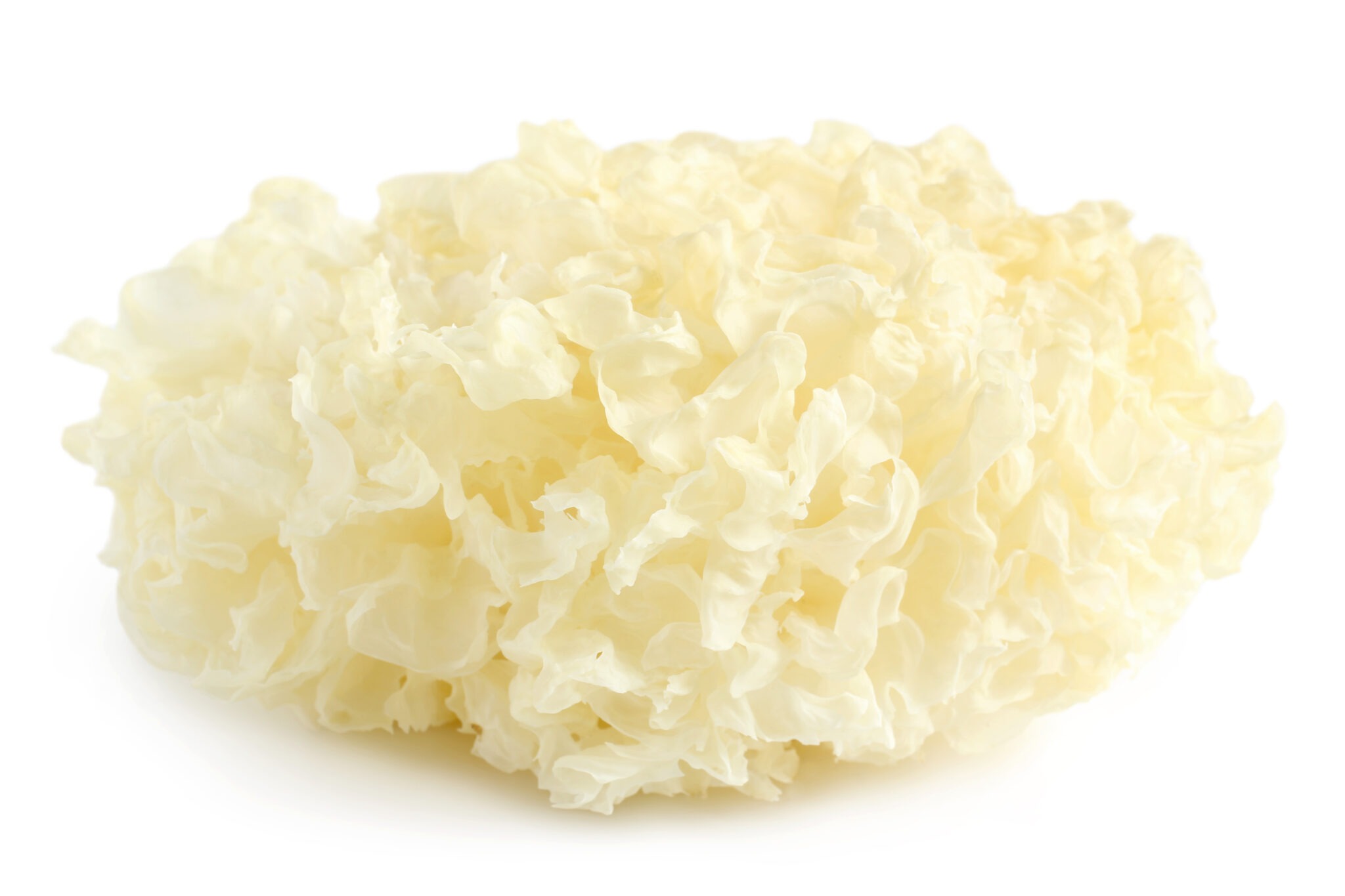 White jelly mushroom is used in traditional Chinese medicine for centuries due to its nutritious and enticing flavors.  This mushroom grows widely on dead branches of broadleaf trees in the tropical areas. It formed shapeless, gelatinous fruit bodies with white and light yellow color (1).

It also contains a variety of minerals, trace elements, and vitamins with a lower amount of energy and lipid (2).

Therefore, intake of snow ear mushrooms may be beneficial in reducing the cholesterol levels on the hypocholesterolemic patient and reduce the risk of cardiovascular disease (3).

Fatigue is a symptom of tiredness caused by stress (physical and/or psychological). Polysaccharides and other antioxidants found in snow ear mushrooms can help to prolong the time for skeletal muscles to become fatigued. It promotes protein and RNA synthesis, which helps to maintain the normal function of the liver and avoid fatigue. Therefore consumption of white jelly mushroom improves muscle function and treats fatigue (4).

Presence of polysaccharides and other bioactive compounds such as gentisic acid, protocatechuic acid, 4-hydroxybenzoic acid, and coumaric acid in the white jelly mushroom act as potent anti-inflammatory agents (5,6).

Polysaccharide obtained from the white jelly mushroom has a high nutritious value which prevents excessive body weight gain and variation in adipocytes (7).

Polysaccharide has excellent antioxidative and cell-protective properties.  It reduces skin fibroblast injury by increasing the synthesis of type I procollagen (12).

It also protects against wrinkles hence white jelly mushroom can improve the skin texture, lower skin harshness, and can be used as a cosmetic candidate for skin whitening and treating skin injury upon aging (13).

9. Preserve the tenderness of the meat

White jelly mushroom addition in pork patties preserves the moisture and fat content. Therefore, the oil holding capacity of mushrooms has a positive effect on the cooking yield of the patty as well as sensory affection (14).

White jelly mushroom has polysaccharide which prevents and treats neurodegenerative diseases like Alzheimer’s. As it enhances neurite outgrowth, which was induced by the nerve growth factor, reduced the neurotoxic effect, and inhibit reactive oxygen species accumulation (15).

White jelly mushroom exerts anti-tumor activity by promoting the host’s natural immune defenses. It can stabilize WBC levels during the treatment of tumors, increased natural killer cell activity, and can enable patients to rebuild their own immune system improving their cancer resistance (16).

Intake of white jelly mushroom (100 or 400 mg/kg) is beneficial to improve the function of impaired cognitive processes by increasing the central cholinergic activity (17).

Side effects of White jelly mushroom

White jelly mushroom is infected by white mold (mycoparasite) and 10% of the mushrooms were affected not fit for consumption due to contamination. Therefore, before the intake of white jelly mushroom precaution should be needed (18).