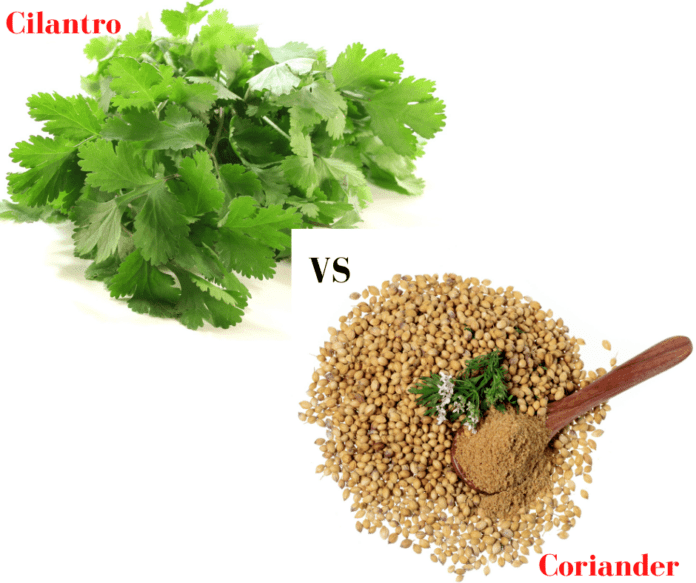 Although cilantro vs coriander is generally the same thing. And are called by different names in different places. Hence Cilantro and coriander (Coriandrum sativum; Apiaceae family) both come from the same plant having different uses, tastes carry different meanings.

When the plant is freshly harvested, the green leaves of the plant are called cilantro. Whereas if the dried fruits are used, the herb is called coriander (1).

In many European countries (like the United Kingdom) these plant leaves are referred to as Chinese parsley or coriander leaves. On the other hand, this herb is generally pronounced as cilantro in North American countries (2).

What is a Cilantro?

Cilantro is the fresh leaves and stems of the coriander plant. It is the first or vegetative stage of the plant’s life cycle.

Cilantro is also the Spanish word for coriander and known for its delicate, bright green leaves and lacy like parsley. It is also known as green coriander and Mexican or Chinese parsley (3).

People either love or hate cilantro due to its taste. Those who love it find the flavor fresh, aromatic, and citrusy with a slight peppery tone. Whereas those who dislike (about 4%–14%) cilantro find the flavor is soapy, mold, insect, or bug-like.

A research study suggested that cilantro or coriander aroma is mostly due to the presence of aldehydes. Those who do not like the taste and smell are sensitive to harmful aldehydes. On the other hand, those not able to detect aromatic chemicals find it pleasant (4).

Cilantro stem is erect, thin, contains several branches and sub-branches. Cilantro leaves are green, oval, and slightly lobed but sections of the upper leaves are elongated and more divided (5).

Cilantro protects the skin against UVB-induced damages as well as increases collagen synthesis (6).

3. To keep the kidney and liver healthy

Cilantro fights against the Salmonella choleraesuis bacteria that cause typhoid, stomach flu (diarrhea, cramps, nausea, and vomiting), and severe infections (11).

Daily intake of cilantro helps to reverse the memory loss induced by the aging process and is beneficial for Alzheimer’s patients (12).

Cilantro helps to prevent or delay the duration, amplitude, and frequency of epileptic fits and other seizures (13).

Cilantro is beneficial to increase sleep time and shows a calming or sedative effect (16).

Cilantro can be eaten raw or frequently used as an important ingredient in eastern, Indian, Thai, and Vietnamese cuisine. It is used to garnish the salad, salsa, soups, and meat dishes due to its attractive green color and aroma (17).

The word “coriander” is used for different parts of the plant including leaves, stems, seeds, etc. When the plant flowers and develops seeds, it is referred to as coriander in most places. The seeds are earthy, warmer, slightly nutty, bittersweet, and spicy that produces a lovely aroma when toasted (5).

It is globular and light yellowish-brown in color while ground coriander is a similar light brown. The seeds when pressed break into two locules each having one seed (19).

Coriander is effective to reduce oxidative stress and improve cognition and memory.  Thus protect the brain from abnormalities (21).

Coriander is also effective to prevent eye complications such as cataract and retinopathy in diabetes mellitus patients (23).

Coriander helps to decrease serum progesterone levels and may be used as an antifertility agent in women (25).

It also helps in reducing the inflammation in the colon thus treating abdominal colic, diarrhea, and inflammatory bowel disorders (27).

Coriander is beneficial to lower both systolic and diastolic blood pressure as well as increase the urine output (diuresis)  (27).

Coriander seed is the basic ingredient in curry and is often added to meats, stews, and bakery products. It is also used in pickling and special drinks, such as mulled wine.

The nutritional difference between cilantro and coriander

Cilantro and coriander vary in terms of nutritional content. Coriander contains a good amount of dietary fiber and minerals while cilantro is a rich source of vitamin C and carotene.

Cilantro leaves contain more than 10 times higher concentrations of carotene than tomatoes, beans, and cucumbers (4).  According to USDA nutrient value of cilantro and coriander per 100 g is as follows (28, 29).