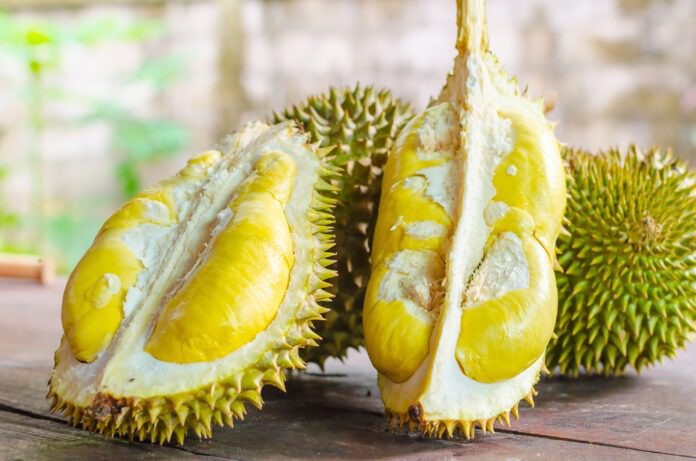 Jackfruit and Durian almost look the same at first sight, but they are different in many ways from each other.  Let’s look at some of the differences between the durian vs. jackfruit

What is Durian fruit?

Durian (Durio zibethinus Murr.; family Bombaceae) is an energy-dense fruit, approximately the same size as coconut or cantaloupe. Because of this unique and preferable taste and aroma, it is known as “king of fruits” in Malaysia, Thailand, China, and Singapore. The name durian originally comes from the Malay word, ‘Duri’ which means ‘thorn’ of the fruits. It contains sharp egg round seeds located inside the edible pulp but seeds are non-edible.

Durian fruit is mostly round in shape, with spiky outer parts either light green or brownish. The edible part (also called aril) is the flesh of durian fruits and has a short shelf-life, from two to five days. Durian’s aril is usually eaten fresh or freeze-dried, but can also be processed and used for jam, candies, and cake. It is also used as a preserved durian, dried durian chips, and frozen durian. Some sharp egg round seeds are located in the edible pulp which seeds are non-edible (1).

It is widely grown in Southeast Asian countries such as Malaysia, Thailand, Indonesia, Philippines, and Brunei Darussalam

Jackfruit (Artocarpus heterophyllus Lam.) is a nutrient-rich fruit; contains blunt spiked outside and soft mushy fruit inside.  It can be consumed raw or cooked, as a vegetable as well as processed form (canned juice and leather). When it’s ripe, the pulp inside the jackfruit turns yellow having large seeds inside which is also edible. These pulps taste like bananas and have crispy or soft in texture. Jackfruit can be eaten raw, salted as pickle, cooked, or as sweet.  The seeds can be eaten after boiling, steaming and roasting that give chocolate aroma and used as a healthy snack (4).

There are two known varieties of jackfruit. These are the hard and soft jackfruits.

What gives the Jackfruit its unique aroma?

Jackfruit is native to India, Thailand, and Indonesia. However, it can be found easily in many parts of Asia and Northern Australia and even in Africa and South America.

Health benefits of jackfruit and durian

Both jackfruit and durian contain a high amount of antioxidant compounds that protect against various diseases.

They are helpful to treat diabetes, inflammation, heart-related disease and prevent obesity.  The presence of dietary fiber in both fruits helps to improve digestion, maintains smooth bowel movements and prevents constipation (7). Many other benefits include anti-aging properties, cure insomnia, lower the blood pressure and relieve the symptoms of depression, anxiety, and stress disorders (8).

First of all, the Jackfruit (Morocae) and Durian (Malvacae) are not from the same family.  It is believed that both (jackfruit and durian) fruits have originated in the same place. Whereas, jackfruit originated in Western Ghats of South Asia, while Durian is from the Malay Peninsula and Borneo island of Southeast Asia. In addition, durian fruit is also known by “king of fruits” although jackfruit is very popular but does not contain any title.

The average production of jackfruit is 10 to 200 fruits each year, whereas durian can yield 15 to 800 fruits in each season.

Moreover, jackfruit is generally oblong or oval while durian is mostly rounder in shape.

The size of a ripe jackfruit is bigger and weight can reach 2 to 36 kg even some large jackfruits weigh about 50 kg. Although, durian fruit is smaller in size with weight 1-5 kg.

Jackfruit has a really sweet, fruity bubble-gum scent which is like a combination of banana, pineapple, and onion. However, durian odor is much stronger, much creamier. Durian smells like rotten egg or onion when open due to the presence of Volatile Sulfur Compounds in it. This pungent smell of durian is so bad that it’s banned in airports, hotels, buses, trains and even storage.

Jackfruit ripened pulp is crunchy and sweet, which is similar to the mixture of apple, mango, banana, and pineapple. Unripe jackfruit doesn’t have its own intense flavor, it is eaten only after cooking and gives a superb taste like eating meat. The presence of fibrous texture and mildly sweet can be used as a vegetarian meat substituted product. The seeds are edible and taste similar to almonds or sunflower seeds.

On the other hand, durian fruit has a rich creamy texture; its fruit is juicier with an acidic, sweet-bitter and savory flavor.

According to the USDA National Nutrient Database, both these fruits (Jackfruit and Durian) are an excellent source of nutrients. However, the energy content of durian is the highest compared with other tropical fruits such as mango, jackfruit, papaya, and pineapple. Moreover, jackfruit flesh and seeds have more minerals and vitamins than apple, avocados, and apricot thus protects from various diseases.

Let’s first take a look at the jackfruit vs. durian nutrition facts (9, 10).

The ripe fruits of jackfruit and durian have short shelf-life, it quickly loses flavor. Thus consume it fresh or stored in the refrigerator for a few days.

Why is Durian banned?

The presence of strong, bold, intense and notorious smell (like rotten eggs or onions) of durian is the reason for its ban. This is due to the presence of volatile sulfur compounds in it. Therefore durian fruit is banned in airports, train or public transportation, hotels and storage in Thailand, Vietnam and Malaysia.

Does jackfruit smell as bad as durian?

Nope, jackfruit also has a strong aroma when it’s fully ripened but spread a very aromatic, sweet, fruity smell without the smell of sulfur.

The durian fruit is taste like creamy, rich custard and gives an unforgettable taste

How do you get rid of the smell of jackfruit?

Some people may eliminate the smell of durian by making fruit juice, wines, and other products so that it transports easily. However, that’s not the case with jackfruit because of its uniquely sweet taste.