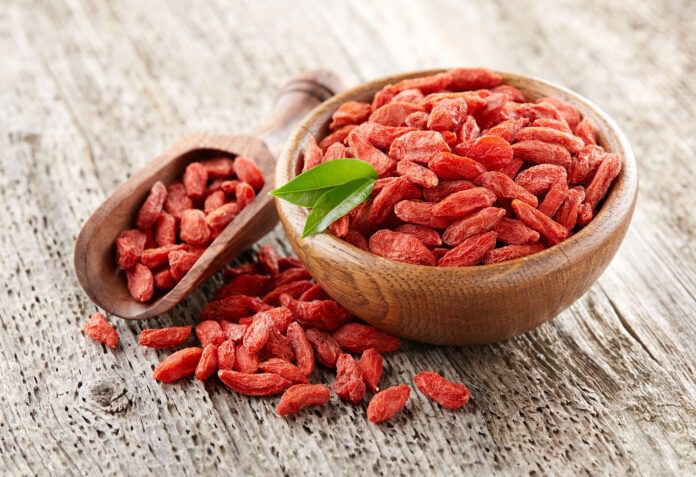 These are bright orange or dark red-colored (1–2 cm long), the pulp is fleshy and soft in texture.  They are sweet and tangy flavor, eaten raw, drunk as a juice, wine, or tea. These berries are also processed to make tinctures, powders, and tablets. Two types of goji berry available in the market such as black goji berry and red goji berry. A research study suggested that phenolics and antioxidant capacities are much higher in black goji berry than red goji berry. Whereas red goji berry contains a higher amount of carotenoid content than a black one. However other nutrition such as linoleic, palmitic, and oleic acids are higher in the fruits of both species (1).

Goji berry was discovered by the Swedish botanist, Carolus Linnaeus in 1753.

Goji berry is a local food that is widely distributed in the arid and semi-arid regions of China, Korea, Japan, Europe, Mongolia, and the Tibetan Himalayas.

Major constituents of goji berries include polysaccharides (30% of the pulp), carotenoids (mainly zeaxanthin), vitamins, fatty acids, betaine, and peptidoglycans (2). The content of vitamin C (up to 42 mg/100 g) in goji berry is comparable to that of fresh lemon fruits (3).

According to USDA fresh as well as dry goji berry is a rich source of protein, dietary fiber, calcium, Vitamin A, Vitamin C and other compounds per 100 g is as follows(4).

Following are the main Goji berries health benefits due to its rich in polysaccharides, phenols and carotenoid.

1. The presence of a high amount of antioxidants and nutrients in Goji berries

Goji berries have recently gained limelight and are also known by “superfruit” in North America and European countries. It contains a high amount of antioxidant compounds such as carbohydrates, polysaccharides, carotenoids, flavonoids and phenolics which exhibit health-promoting properties. These compounds fight against harmful radicals, oxidative stress, and inflammation as well as improve the immunity of the body (3).

The goji berry is an excellent source of polysaccharides, betaine and carotenoid (especially zeaxanthin up to 60%), a key component of vitamin A. These bioactive compounds improve visual function; reduce cell damage or degeneration and dry eye disease symptoms. It also contains taurine (amino acid) which may block the damage of cells (diabetic retinopathy) in a diabetic person (5).

It halts the progression of vision loss from age-related macular degeneration in older people (6).

Goji berry can protect neurons from damage by various agents that cause diseases (9).  Thus, treats age-associated neurodegenerative diseases such as Alzheimer’s disease (10).

The polysaccharide is an active component of goji berry used in traditional Chinese medicine. It helps to increase sex hormone levels, improve sperm quantity and quality and treat penis erection dysfunction. Therefore, these berries are beneficial for the treatment of infertility and sexual dysfunction and improve the reproductive system (14).

Long-term ingestion of these berries is also effective for the reduction of abdominal fat (waist circumference) and lipid peroxidation (17).  Thus goji berry increases metabolic rate and protects against the development of cardiovascular diseases, diabetes, and related complications (18).

A research study suggested that 150 g of fresh goji berry, for 30 days by older healthy adults (55-72 years old) improves the immune system. Daily consumption of goji berry increases general feelings of well-being, such as fatigue and sleep, and boosts short term memory. It also increases in the number of lymphocytes and improves focus without any adverse effect on the elderly (19).

Side effect of Goji berry

The person who is allergic to peach peel and a protein called panallergen nonspecific lipid transfer protein should avoid goji berry.  It may cause allergy with symptoms like hives, nausea, dizziness, or wheezing (20).

2. Goji berry may cause drug interaction

The individual who is already under medication like warfarin, blood sugar, and blood pressure drug should avoid consumption of goji berry. It may cause serious health problems.

Goji and drug interaction result in bleeding from the nose (epistaxis), under the skin (bruising) and rectal bleeding. However, these symptoms are resolved with goji berry discontinuation and other medicine but precaution should be needed before consumption (21).

Moreover, goji tea contains the same interaction with this drug (warfarin) because goji may enhance the anticoagulant action of warfarin.  So people should avoid all herbal drinks, which contain Goji berry while they are taking warfarin (22).

4. Risks of pollen allergy with other fruits

Anyone with an allergy to tomatoes, tobacco, and nuts should consult the doctor before consuming goji berry (24). It may cause sensitization and show strong cross-reactivity of goji berry with tomato, tobacco, nuts and Artemisia pollen (25).

5. Goji berry may cause liver injury

A research study reported that consumption of goji berry tea 3 times a day may cause inflammation in the liver, mild jaundice.  This goji berry may affect the liver with symptoms like non-bloody diarrhea, weakness (asthenia) and colic abdominal pain. Therefore, the individuals with gastrointestinal conditions should avoid consumption of goji berries which may cause autoimmune hepatitis.

A person who has already skin conditions may develop redness of the skin caused by dilatation and congestion of the capillaries (generalized erythematous).  It also causes flat and raised lesions on the skin (pruriginous maculopapular rash) after intake of goji berries (26).

Atropine, a toxic alkaloid, is naturally found in goji berry however this content is far below toxic levels.

What are the side effects of goji berries?

How many goji berries should you eat a day?

The optimum dosage of the goji berry is not standardizing worldwide because it may vary from manufacturer to manufacturer. A well-known standardization for goji is lacking.

A research study suggested that 120 milliliters of goji berry juice containing polysaccharides that were equivalent to those found in 150 g of fresh fruit goji berry (15).

On average 6–15 g daily of goji berries (dried) can be used for adults but children there is no data available. Although it may vary when incorporated into herb formulas for treating diseases

Why are goji berries bad for you?

Nope, generally goji berries in moderate amounts are not bad for you. However, people who are under medication should consult a doctor before use.

How do you eat goji berries?