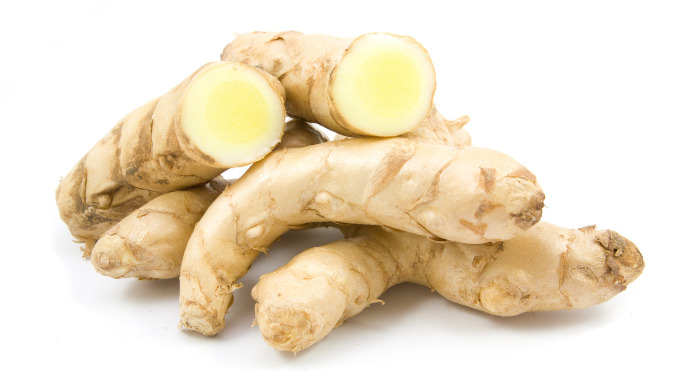 White turmeric (Curcuma zedoaria) is a medicinal tuber plant and ancient spice belonging to the Zingiberaceae family. The plant is 50 cm tall and has green leaves with brownish-purple veins that narrow at the base. White turmeric has large fleshy tubers that look like ginger from the outside and like turmeric from the inside (1). White turmeric benefits are as follows.

After maturity white turmeric rhizome becomes thin brown or gray and has a hard dark orange interior. Dried rhizomes have an aromatic, camphoraceous smell, like turmeric and mango, and a  strong bitter aftertaste. White turmeric is available as a powder, or dried and even sliced form.

It also contains alkaloids, saponins, flavonoids, glycosides, and carbohydrates. Apart from this, phenols, tannins, and phytosterols are also present in white turmeric. This perennial plant is a rich source of essential oils, starch gums, etc (3).

1. Good for the brain

White turmeric benefits are due to phenol and flavonoids that act as natural antioxidants. These antioxidants improve memory and learning impairment in the brain (4). Moreover, curcumenol found in white turmeric reduces the inflammation of brain cells thus treating various brain diseases (5).

Ermanin and curcumin found in white turmeric inhibit the clumping of platelets in the blood thus preventing blood clotting (7). It also reduces plaque that builds up inside the arteries thus protecting the body from heart disease (8).

White turmeric rhizomes contain sesquiterpenes like furanodiene, furanodienone, and curcuzedoalide which reduce swelling and are used for the treatment of inflammatory diseases. (9)

White turmeric contains polyphenolic compounds and other potent antioxidants such as beta-carotene and ascorbic acid.  It also contains curcumenone, curcumenol, Isocurcumenol, and curcuzedoalide (11). These compounds suppress the growth of cancer cells such as ovarian, cervical, nasopharyngeal, leukemic, lung, gastric, and breast cancer cells. It also induces apoptosis without inducing toxicity to the normal cells (12).

White turmeric is a good source of tannin, flavonoid, and terpenoid. It also contains curcuminoids including curcumin and cinnamate. These compounds fight against various bacterial and fungal infections and protect the body from infection (15).

The presence of terpenoids in white turmeric reduces the body temperature and works similarly to paracetamol. Therefore, intake of white turmeric may be helpful to treat the fever and show antipyretic effect (16).

A side effect of white turmeric

White turmeric and its oil contain some components that can inhibit the formation of blood vessels. That results in damage to the supply of oxygen and nutrition to the embryo, which finally led to abortion (17).

However, a research study suggested that its taboo, white turmeric only kills cancer cells but precaution should be needed before consumption (18).

2. Thoroughly wash before use

It is important to wash white turmeric thoroughly and carefully before you eat because it can cause serious health issues (19).

Raw turmeric contains a high amount of crude protein and other water-soluble nutrients and, presumably, toxic constituents. Traditionally, it is washed multiple times in water for a long time to remove all toxic content.

How to eat white turmeric

White turmeric spice is eaten in salads, pickles, and aromatic tea. It can be used as an ingredient in curry powder and seafood dishes. A substitute for arrowroot and barley is also prepared from the rhizomes. This starch can be used as a dietary item for infants and convalescents due to its cooling and demulcent properties.

1. How to remove turmeric stains from white clothes?

2. What is white turmeric?

White turmeric closely resembles turmeric (Curcuma longa) in appearance. The rhizome of this plant is large, fleshy, and has a warm, spicy, woody, and camphoraceous cineolic odor. Rhizome has a strong bitter taste when cut into small pieces. It contains sesquiterpene like curcumin and many more that have diverse biological activities.