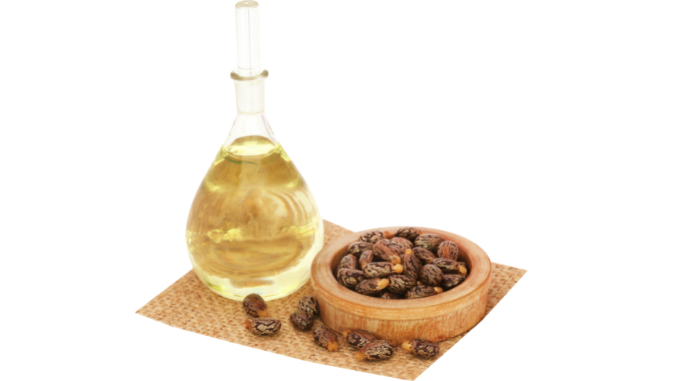 Castor oil is derived from the bean of the castor plant of the Euphorbiaceae family. Various castor oil health benefits are laxative and anti-microbial properties & induce labor, it’s also a potent insect repellent. Important note: Always use a controlled amount as excessive may have side effects on the body.

Castor oil is extracted by milling, boiling, pressing, or solvent extraction and is also known as Oleum Palmae Christi. This oil is viscous, pale yellow in color, inexpensive, environmentally friendly, and non-drying oil with a bland taste (1). The use of castor seed oil has been documented since 2000 BC in India for its use in lamps and in local medicine as a laxative, purgative, and cathartic in Unani, Ayurvedic, and other ethnomedical systems (2).

Castor oil’s major producing countries are India, Mozambique, China, the United States, and Brazil, which produce over 95 % of castor beans in the world (3). It is originated in Africa and then got distributed to ancient Egypt, India, China, Iran, Africa,  Greece, and Rome. 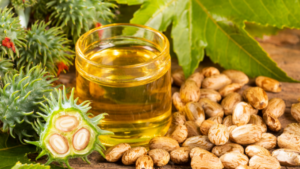 Castor oil health benefits are due to thujone, 1,8-cineole, α-pinene, Camphor, and camphene which inhibit the growth of various bacteria such as Bacillus subtilis, Staphylococcus aureus, and Enterobacter cloacae.

This oil also contains cytotoxic and apoptotic properties and inhibits the growth of cancer cells thus castor oil may be useful as a natural remedy for the topical treatment of infectious diseases (5). Furthermore, polyethylated castor oil-based standard paclitaxel also plays an important role in the treatment of metastatic breast cancer (MBC) (6).

2. Castor oil is used as an insect repellent

Application of the oil to the wound is very beneficial because this oil treat ulcer with shorter treatment time and time to heal and a potential reduction in treatment-related nursing labor costs (9). Moreover, ricinoleic acid found in castor oil is effective to permeate through the skin and act as an anti-inflammatory agent for wound healing applications (10).

Contain a large amount of ricinoleic acid which is beneficial for reducing edema formation. Thus the application of castor oil acts as a non-pungent anti-inflammatory agent which may reduce established edema and is suitable for peripheral application (11).

A research study suggested that castor oil (30 g FA/kg) is helpful to increase milk fat and modified the milk fatty acid composition by increasing the hydroxy- and oxo-fatty acid in sheep (12).

Intake of castor oil (60 mL) in warm water (200 mL) may induce labor within 24 hours and women delivered vaginally with little to no maternal or fetal complications as compared to women who receive no treatment (13). Therefore, 91% of women who consumed castor oil may have safe non-pharmacological methods in post-date pregnancies (14).

Castor oil contains 90% of ricinoleic acid which attenuates the signs and symptoms of rheumatoid arthritis and reduces inflammation. Thus castor oil capsule of 0.9 mL thrice daily for 4 weeks may use in the treatment of knee osteoarthritis (15).

Castor oil show a beneficial effect on the lymphatic system enhancing immunologic function. Thus castor oil acts as an immunomodulatory agent that increases the production of lymphocyte and improves the health of the spleen and thymus (16).

The combination of castor oil and mineral oil nanoemulsion may be used as a soft contact lens because it is non-irritant with no adverse effect and prove best for ocular application (17).

Castor oil solution (2% in 20 mins) for 7 days shows a wonderful effect on denture hygiene, removing denture biofilm which is involved in oral infections and systemic diseases (18).

Castor oil is one of the vital ingredients in oil therapy and oil retention enemas help to replenish the depleted body constituents. Thus oil therapy plays an important role in the management of rheumatoid arthritis (Aamavata) (20).

Implantation of castor oil polymer after reaming of the tibial medullary canal resulted in the formation of new bone. At 90 days a postimplantation, a thick layer of bone tissue rich in osteocytes is formed and at 120 days, rapid maturation of the bone tissue and organization of collagen fibers was evident, and at 150 days, a complete repair was observed (21).

Castor oil contains ricinoleic acid, along with certain of its salts and esters function may use as skin-conditioning agents, emulsion stabilizers, and surfactants, Castor oil (81% concentration) is safe and may use in lipstick (22). Soaps, waxes, greases, lubricants, hydraulic, brake fluids, fertilizers and coatings, and paints material also use castor oil (23).

© Foodthesis participates in the Amazon Associates and affiliate advertising programs designed to provide a means for site to earn commissions by linking to Amazon. This means that whenever you buy a product on Amazon we get a small percentage of its price. That helps support foodthesis.com with some money to maintain the site, and is very much appreciated.
Loading Comments...