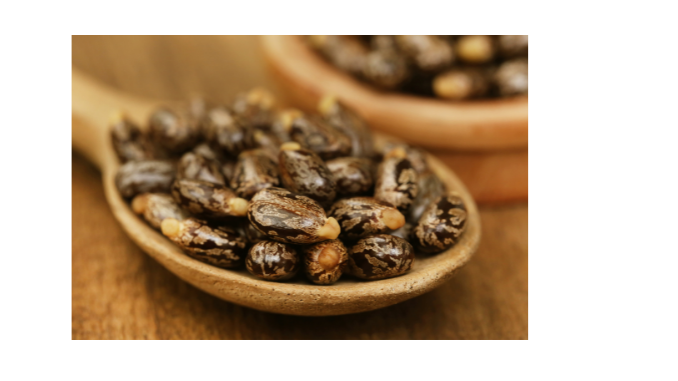 The seeds of the castor contain mainly around 50-55% oil, 12-16 % protein, and 27 % fibers. The oil of the seed again contains 85-95 % ricinoleic acid also known as 12-hydroxy-9-cis-octadecenoic acid is a fatty acid. This compound is having analgesic and anti-inflammatory effects (2).

Well, the preparation of this oil is different from the castor oil which we are using generally. In this method, the seeds of the castor are roasted and then grind in a mortar after that water is added and a thick paste is prepared. After that, the whole mixture is slowly boiled over a fire which results in pungent thick dark oil (3).

The Jamaican black castor oil benefits are due to ricinoleic acid also known as 12-hydroxy-9-cis-octadecenoic acid is a fatty acid. Which is around 85-90 % of the total oil content.

This oil is good for hair growth. Applying Jamaican castor oil helps in moisturizing the hair and prevents hair fall. The best part of this oil is that it can be applied on a variety of hair ranging from thick to thin and curly to straight (3). 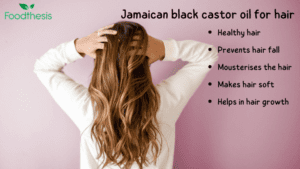 How to use castor oil for hair

Jamaican castor oil is used with other oil in combination. Only little amount of this oil is sufficient for hair treatment (4).

Mix 3 tablespoons of castor oil plus 1 tablespoon each jojoba oil and coconut oil in a dark glass bottle. apply before washing the hair. it helps in locking the moisture and makes hair softer. 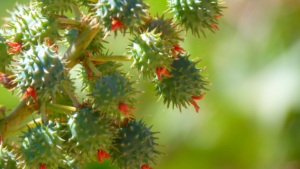 The layer of this oil helps in protecting the skin from discoloration and seals the moisture thus making the skin soft and hydrated (5). Other benefits of applying this oil are protected from infections, healing scars, and controlling sebum.

© Foodthesis participates in the Amazon Associates and affiliate advertising programs designed to provide a means for site to earn commissions by linking to Amazon. This means that whenever you buy a product on Amazon we get a small percentage of its price. That helps support foodthesis.com with some money to maintain the site, and is very much appreciated.
Loading Comments...